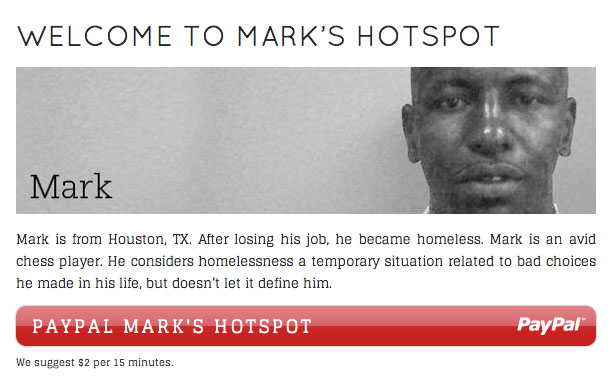 Mark moved to Austin from Houston four or five months ago. He’s had a hard time finding work. “Tough economy,” he says. But this week he’s employed (sort of) providing internet access to data-starved conference goers at South by Southwest.

The “Homeless Hotspots” project has become the talk of the conference this year and elicited strong feelings on what is a complex issue.

The project is described as a “charitable innovation” by the innovation lab of global ad agency Bartle Bogle Hegarty (BBH) to “modernize the street newspaper model employed globally to support a city’s homeless population.”

Essentially what they’ve done is given a number of Austin’s homeless (who they call “collaborators”) 4G wireless hotspots and sent them to the crowded area around the Austin convention center.

To add some context, during SXSW this is an area that is overrun by marketers – every surface is covered by posters, big brands have spent ungodly amounts of money to create “experiences” and you can’t walk a block without someone trying to hand you some kind of marketing material for some new startup.

So back to Mark.

You send a text message to this shortcode and then receive the password for Mark’s hotspot in return as well as a link where you can make a Paypal payment. You can pay what you’d like (they suggest $2 per 15 minutes) and Mark gets to keep anything you give him. . Edit (3/16): BBH is now disputing this, saying that the participants were guaranteed $50 a day for 5-6 hours of work, more, they say, than Texas’ minimum wage.

After reading a number of stories about the project yesterday – mostly by academics and pundits who had mostly written strongly worded pieces condemning the project, as The Atlantic’s Megan Garber points out, nearly all outraged on behalf of the participants and almost without exception coming from a place of privilege – I was glad to run into Mark.

I wanted to ask him what HE thought of the project.

Mark said he was grateful for the opportunity. He explained how he lost his job and moved to Austin from Houston 4 or 5 months ago and has been having a hard time finding work. He’s happy to have a couple days of work.

We can debate whether or not this project is the cynical exploitative mess that some have called it. But it has at least gotten people talking and thinking.

Instead of averting our eyes, the project forces us to examine a number of issues surrounding homelessness – including some of the usual questions around basic needs and how, as a society, we can find better ways to provide for them, but also how the experience of homeless is changing in a digital age.

I’m still thinking about all this today and have had a number of fascinating conversations as a result. (here are a couple of interesting takes that are worth reading)

We thought we’d come out of SXSW talking about the next hot app or some new trend in mobile commerce, but here we are talking about a very real problem and some of the complicated issues surrounding it.

I think I prefer it this way.